While it seems quite remarkable to think that after almost seven years of being settled here in Slovakia, my family and I haven’t visited Devin Castle.  But all things considered, I shouldn’t really be surprised.  There are so many places to go and things to see in this neck of the woods: my humble abode, in the town of Skalica, sits cosily 280 km (175 miles) equidistant between Budapest to the south and Prague to the north.  And with Vienna and Bratislava only 120km (75 miles) and 90km away respectively, this truly is explorers’ gold at the heart of Europe.

So, it is on a fine Saturday in early spring we decide to checkout Devin.  With my wife and two children (7 and 2) in tow, we set out, with picnic and blanket at the ready and pushchair in the back of the car.  I regularly drive this route into Bratislava for work, about half of which is motorway.  Today is going to be different.  I have decided to take a leisurely drive through the towns and villages, by-passing the motorway linking Brno in the Czech Republic with Budapest in Hungary, via Bratislava in Slovakia.

While Slovakia is a natural habitat for wildlife, my experience tells me that caution should be taken when driving.  In is not unusual to see herds of deer crossing open fields and roads, birds of prey flying overhead, fields full of ducks, pheasants, hares and other wildlife, and boar with their young lurking in the thick wooded forest.  Most worryingly is the sight of deer grazing at the side of the motorway!  Much work has been done, (and presumably many euros have been spent) recently to secure the fencing on both sides of the motorway, including the construction of a wildlife crossing, though it is said that many more will be needed.

We find a quiet spot and sit down for our picnic lunch, a grassy area beside the river, away from the hustle and bustle.  After lunch and a spot of relaxation, we venture into the grounds of the castle.  Entrance for a family of four is 8 euros, and so we begin the climb.  Though rather steep, the path is well-maintained and meanders through the grassy hill.  En-route we meet sheep and goats, and manage to find our way to the top - thankfully son and pushchair have made it too! 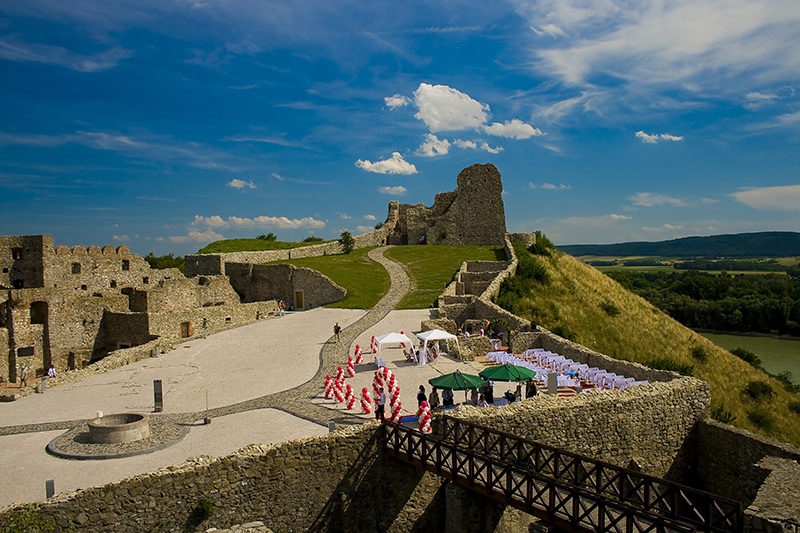 The castle itself sits on top of a 212 metre-high cliff, overlooking the confluence of the Danube and Morava rivers.  Owing to its strategic position, it once controlled the important trade route along the Danube as well as the trade in amber, which was transported from the North Sea and Baltics to the south.  It is currently in various stages of preservation.  The upper-castle has been closed to the public since 2008, due to stability issues with the walls.

Our journey takes us through the woods close to Gbely where, incidentally, I once had an encounter with a wild boar.  Suffice is to say that my car bore the brunt of this larger than life animal!  Today, thankfully, there are no such altercations.

We continue through the small village of Velka Levare, known locally for its production of asparagus, and on to Malacky, a town linked by motorway and rail to Bratislava.  It has thus become home for many commuters to Bratislava and has, like much of the area around Bratislava, seen a rapid increase in the prices of homes.  Next we pass Lozorno and Stupava, and drive alongside the huge VW Group factory, where models such as the Audi Q7, Porsche Cayenne and VW Touareg are produced. Watching the cars being lifted along a giant conveyor, high into the air is a highlight for my sons.

And so we approach our destination, driving through Devinska Nova Ves and the beautifully picturesque valley, alongside the River Morava and the border with Austria.  It is a lovely part of Bratislava, away from the concrete and the buzz of the city. This place is, though, a tourist magnet, popular with both locals and visitors from afar.  Many of the more energetic are using the two-wheeled form of transport.  Lycra-clad families and friends, enjoying the fresh air and lovely spring sunshine and the numerous bike trails in the surrounding, lush countryside.

We park our car at the foot of the castle.  While there are still spaces in the car park, we have arrived relatively early and the place is quite busy considering it is early in the season.  Pony rides attract families with their young, restaurants are busy with cyclists keen to quench their thirsts with a spot of the fine, local beer or ‘limonada’ (soda).  The beer in these parts really is cheaper than water!  For the adventurous, it is possible to rent a kayak to navigate the waterways. 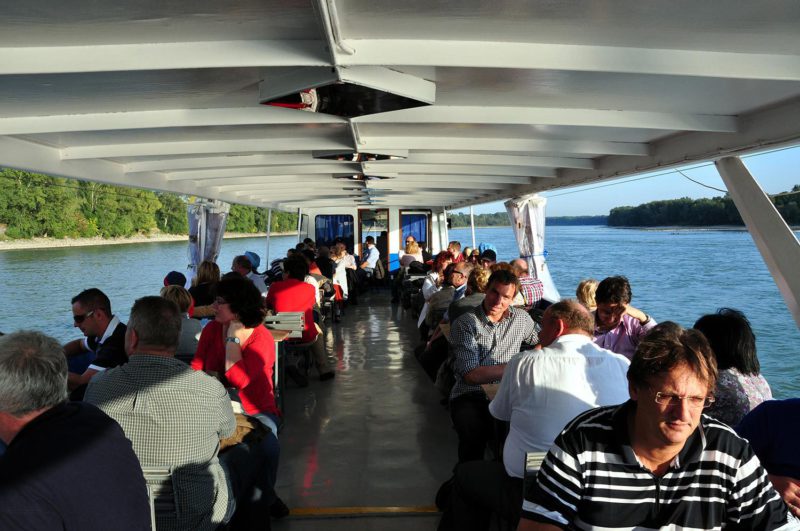 Before exploring the castle, we decide to have a look around for a while, enjoying the might of the River Danube alongside, carrying with it both tourist river boats and barges from Budapest, through Bratislava to Vienna and beyond.  In the main tourist season (May to September) there are regular services that ferry tourists from the centre of Bratislava and other towns in Austria. 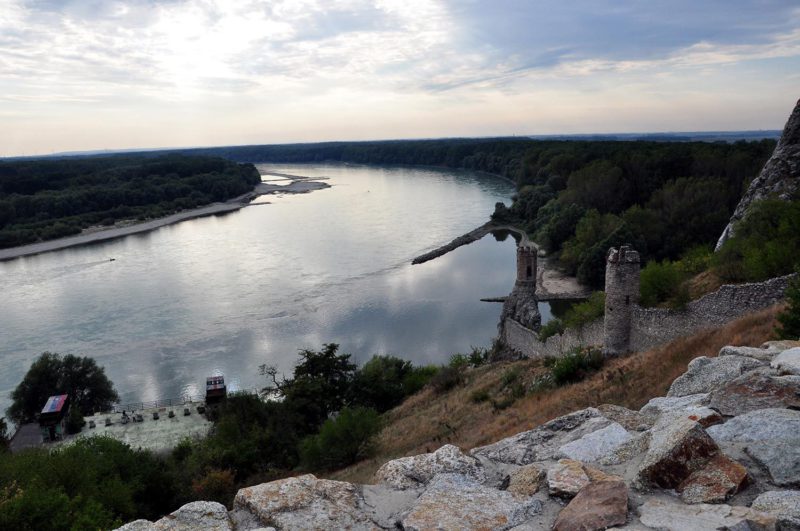 Despite that, the views from the top of the accessible parts are quite spectacular.  Overlooking the two great rivers, striking cliffs, the surrounding hills and lush countryside, and views over the border to Austria.  Although the castle, itself, does little to inspire, there is that overarching feeling you are part of something special.  You can imagine how important this place must have been in bygone times, and you can look out over lands and empires and feel the history.